Turbocharged diesel cars have been on the market for more than four decades now. Gasoline-powered cars, on the other hand, only started to become turbocharged around fifteen years ago. So why this difference?

The engine and turbocharger principle is basically the same. All modern diesel and gasoline engines use the 4-stroke principle (in layman’s terms: suck, squeeze, bang, blow). Turbochargers for both type of engines are largely similar as well. The turbine side is used to extract energy from the exhaust gas and the compressor side is used to provide pressurized air to the engine. However, the main difference between a diesel and gasoline engine lies in the combustion process.

Diesel is less flammable than gasoline. Actually, if you throw a match into a puddle of diesel, it will go out. Do this with a puddle of gasoline, and you have a fire! The reason is that the evaporation of the gasoline allows it to mix with oxygen in the air making a combustible mix. To create a combustible diesel mixture you need a high pressure and temperature environment, hence why the compression ratio for a diesel is high, compared to a gasoline engine.

In a diesel engine, the combustion happens spontaneously due to the high pressure and temperature in the combustion chamber. Due to this high compression ratio and therefore pressures during combustion, the connection rods, crankshaft and pistons need to be strong (which effectively means heavier). This is the reason that a diesel engine does not run at the high engine RPM’s which a gasoline does, because the materials simply can’t cope with those forces.

As already mentioned, the compression ratio in gasoline engines is lower since the gasoline does not need a high pressure and temperature environment to combust. Since the gasoline is actually injected in the compression stroke, it is highly undesirable to have a compression, which can ignite the mixture as it can cause engine failure if that compression ignition happens at the wrong timing (also called knocking). The combustion in a gasoline engine is controlled/started by the spark plug and needs a very accurate air to fuel mixture to work optimally.

During combustion, the temperatures within a diesel engine are higher than in a gasoline engine. This is due to the higher start point of compression and the “slow” combustion. Due to the low engine RPM the piston movement is slow. Therefore, the volume in which the combustion takes place is small. This means the increase in pressure due to the combustion makes the temperature rise rapidly. The larger compression ratio of a diesel engine also means a large expansion ratio. Exactly this causes the final temperature that the turbocharger gets to be lower than a gasoline engine. Generally the diesel exhaust gas will be around 800~850C° and gasoline around 950-1050C°. A significant difference you could say. 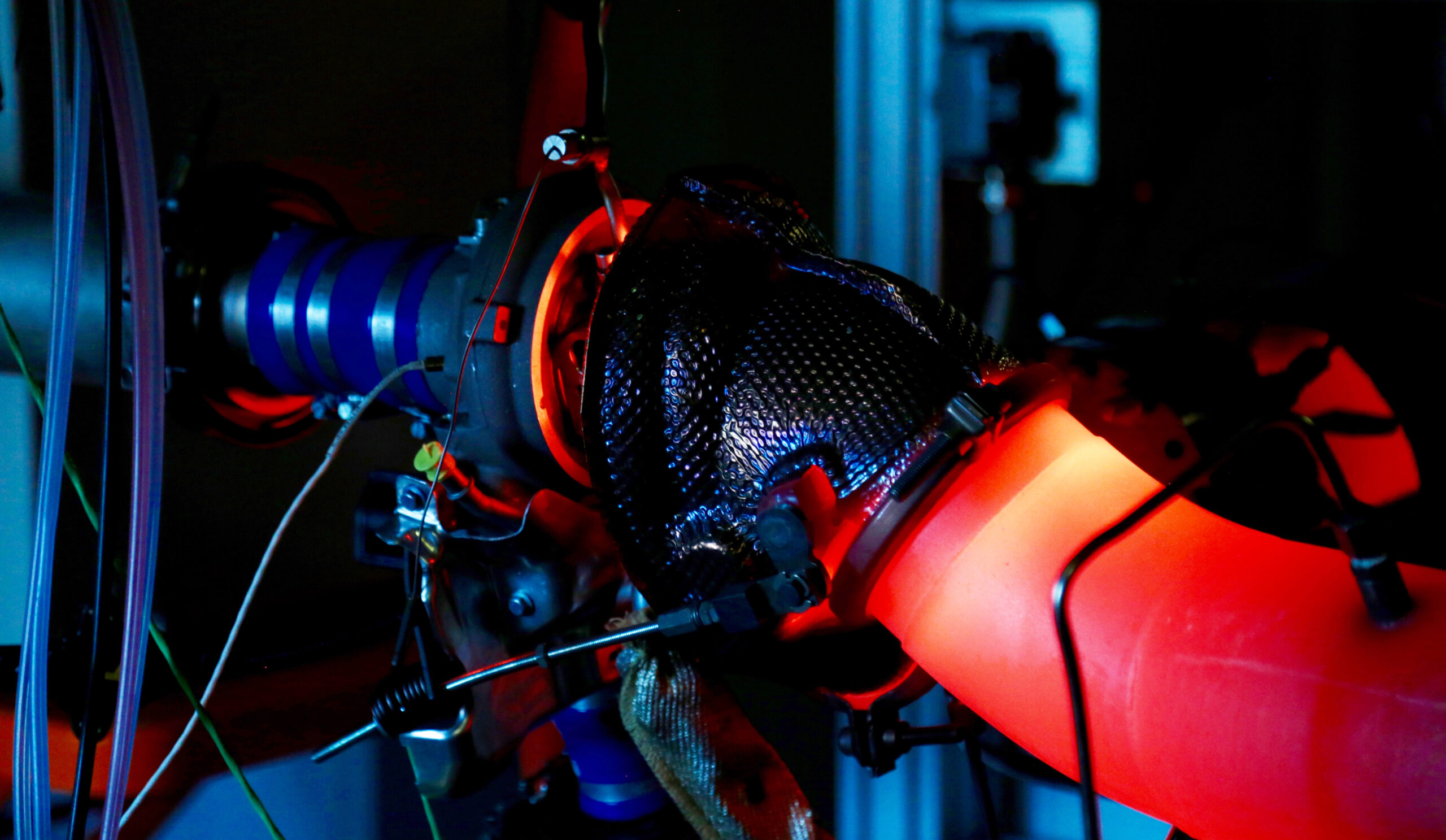 The heat difference between the two engine types also leads to a difference in the use of turbocharger materials. The turbocharger for gasoline applications requires more advanced materials to withstand the high thermal loading conditions. Special alloys, including expensive materials such as nickel, are commonly used for these turbochargers.

Secondly, the heat transfer from the hot turbine area to the bearing housing is protected from these high temperatures by the application of a full water jacket and an optimized internal heat shield. This avoids any damages on the bearing housing and bearing system itself as well as keeping the temperature below the oil coking limit (point at which oil starts to crystallize and forms very hard black particles).

Furthermore, this temperature difference causes a difference in applicable technologies. Although a VG system is preferable from a performance point of view, it is challenging to ensure its functionality over lifetime in a harsh gasoline application. Whereas a colder diesel application makes it easier on the entire system. This is the main reason that we generally see all current gasoline cars with a waste gate turbocharger and all diesel cars with a VG turbocharger.

The market for diesel-powered vehicles has been shrinking since the diesel gate in 2015. Due to the combustion process of a diesel engine, it is more susceptible to create NOx. This raises the need for highly specific after treatment systems (NOx trap, SCR) to comply with latest regulations.

Gasoline-powered vehicles also need to become more efficient to live up to future regulations. One of the solutions to this is VG turbocharger applications. A VG system makes it possible to adjust the turbine operating point continuously during all engine-operating points. This ensures that all components work in their most efficient point, creating an overall efficient engine.

So is gasoline and diesel the only option for a turbocharged car? While new car types such as PHEV’s and MHEV’s call for other drive train concepts and thus also turbocharger technologies, like e-assist and e-compressor, the fuels basically remain gasoline and diesel. Many OEM’s are testing with lower quality gasoline as well as gasoline with a higher ethanol level to see if they can reach the same engine performance. This puts some extra requirements on the turbocharger. In the future, we will see if any other fuel types will disrupt the market and call for other turbocharger requirements.